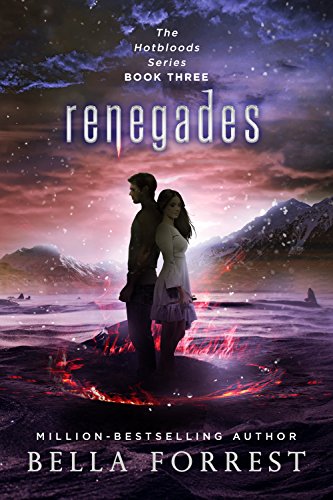 Vampires have never been so hot... Million-bestselling author Bella Forrest returns with an all-new paranormal romance!

One last adventure. That's all Riley wants before heading off to college and parting ways with her two best friends. Spending their last summer together on a Texas farm in the middle of nowhere isn't quite as exciting as they'd planned...

That is, until they stumble upon secrets no human should know.

Men who appear and disappear.
A giant wing hidden in the creek.
Screams in the dead of night.

Every oddity seems connected to their strange--and alarmingly attractive--new neighbors, led by the stormy-eyed Navan. For reasons she can't explain, Riley feels drawn to him and the story of his past.

But Navan has a monstrous side, one that grants him incredible powers that are not of this world...and ashen skin that feels like fire to the touch.

When events take a dangerous twist, Riley is determined to protect her friends at all costs, but as she unravels each thread of the mystery, she finds herself entangled in a supernatural conquest that is far bigger than Texas... and even Earth itself.

A mystery.
A romance.
And a journey that could change the fate of the human race.

Prepare for a unique spin on the lore you love - and an adventure that is as thrilling as it is unexpected.

Since this is the third book in the series and the first time I am posting about this author, I thought it might be helpful to give a little background. I have found Bella’s books to be unique in that they remind me of watching a TV show (and she publishes almost as frequently). Each book is its own mini adventure or mystery building toward the finale.

A Few More Things You Should Know About Bella Forrest’s Books:

Possible spoilers if you have not read the series yet.

As always, Renegades picks up where Coldbloods left off and continues with another fast paced adventure. Riley’s growth from a weak “Kryptonian” that made poor decisions and relied on Navan, to a strong woman who can hold her own in the Vysathian army is really enjoyable to witness. Additionally, I found that this book had a little more suspense than the last which kept me on the edge of my seat, waiting for our heroes to get caught. Queen Brisha is also interesting so I was glad to see a bit more of her in this book.

“I think love is inexplicable. It makes no sense, and yet it can be the sincerest thing in the world… It makes fools and heroes of us all.”

What I really like about this series so far is the new take on old creatures with the addition of our winged space vampires. I am excited that the next book is going to take us to another planet in this new world to meet yet more new species of friends or foes.

Overall this was another fun, fast-paced addition to this series.

Next book: Venturers out on March 11th

Recommended for: Fans of paranormal romance, action and adventure, cliff hangers, and all Shaddicts

Other Series by Bella Forrest: