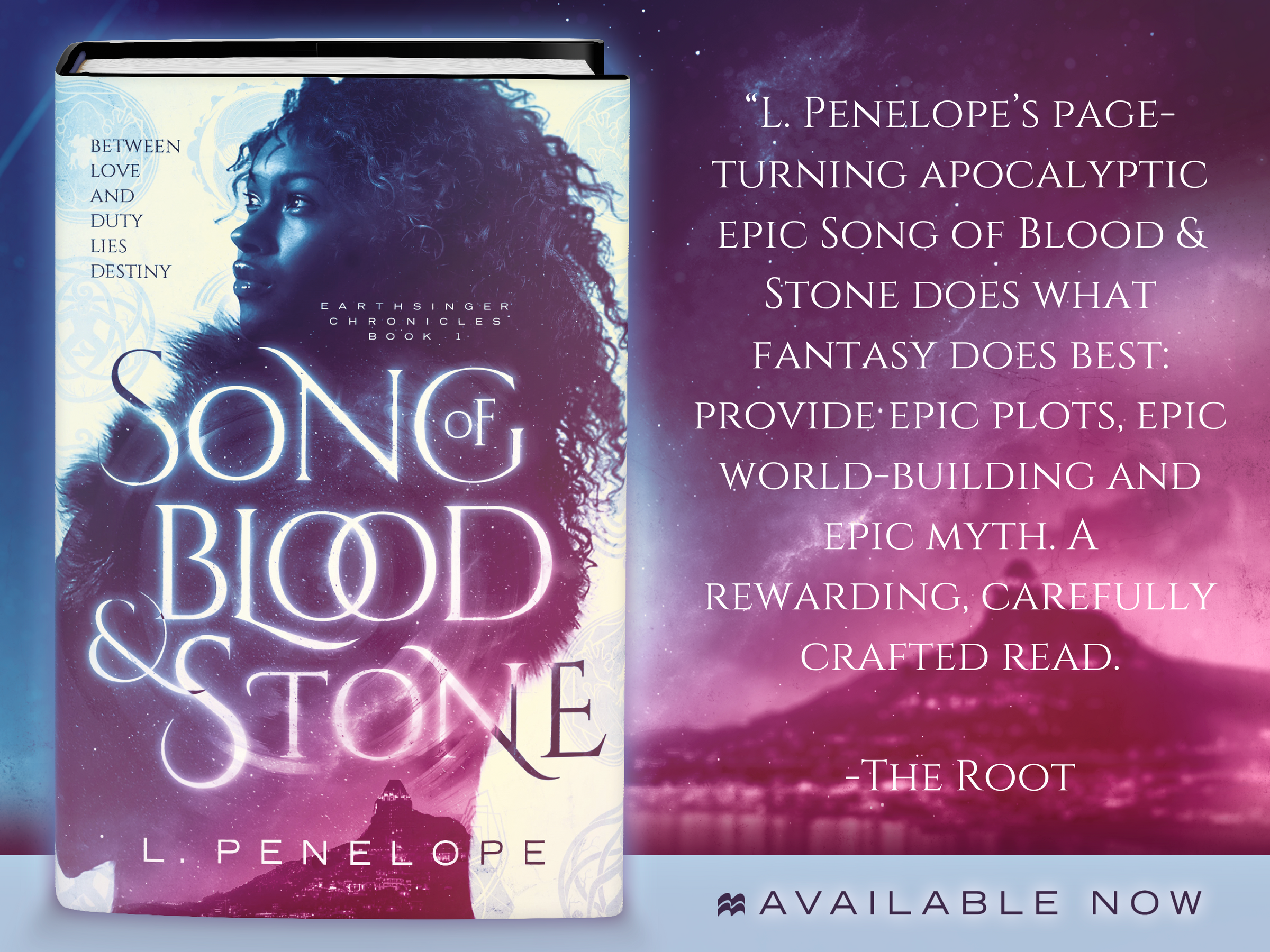 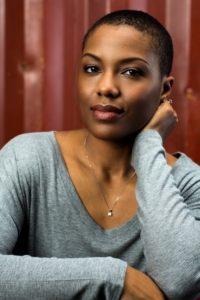 Leslye Penelope has been writing since she could hold a pen and loves getting lost in the worlds in her head. She is an award-winning author of new adult, fantasy, and paranormal romance. She lives in Maryland with her husband and their furry dependents: an eighty-pound lap dog and an aspiring feral cat.

About Song of Blood and Stone 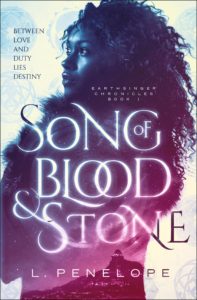 Orphaned and alone, Jasminda lives in a land where cold whispers of invasion and war linger on the wind. Jasminda herself is an outcast in her homeland of Elsira, where her gift of Earthsong is feared. When ruthless soldiers seek refuge in her isolated cabin, they bring with them a captive–an injured spy who threatens to steal her heart.

Jack’s mission behind enemy lines to prove that the Mantle between Elsira and Lagamiri is about to fall nearly cost him his life, but he is saved by the healing Song of a mysterious young woman. Now he must do whatever it takes to save Elsira and it’s people from the True Father and he needs Jasminda’s Earthsong to do it. They escape their ruthless captors and together they embark on a perilous journey to save Elsira and to uncover the secrets of The Queen Who Sleeps.

Thrust into a hostile society, Jasminda and Jack must rely on one another even as secrets jeopardize their bond. As an ancient evil gains power, Jasminda races to unlock a mystery that promises salvation. The fates of two nations hang in the balance as Jasminda and Jack must choose between love and duty to fulfill their destinies and end the war.

As a reader, it’s not common to come across a truly original world, but Penelope manages to do just that in SONG OF BLOOD & STONE. In the vein of Brandon Sanderson’s Way of Kings, Penelope “shines a bright light into epic fantasy” (Booklist) and bridges the gap between the world of romance and fantasy. Inspired by religion and folklore, Penelope develops the start to what will be a series that will take readers by a storm.

What inspired you to write this series? What came first: The characters or the world? What was your inspiration for the magic of Earthsong? Were you inspired by other books? Movies?

When I first wrote this book, up until the time I gave it to my first editor, I thought it was going to be a novella. It was always meant to be a fairytale-esque story of a girl’s journey from the margins of society straight to its upper echelons. The characters Jack and Jasminda were there before the world was ever clear in my mind. The first scene I wrote was the one where they meet in front of her cabin. I knew they were from different, warring countries and they came from very different sorts of lives, but that was all. Through the magic of revision (lots and lots of revision) I discovered the journey that the characters would go on and all the conflicts they would face.

I love fantasy and there were so many inspiring series that I soaked in prior to writing the book, from Graceling by Kristin Cashore to Seraphina by Rachel Hartman. But I think this book owes its biggest inspiration to the Lumatere Chronicles by Melina Marchetta. Her fantasy world felt well realized and complex, filled with incredibly detailed characters, groups, nations, and settings. But I also wanted to write a kinder, gentler fantasy novel that wouldn’t double as a doorstopper. And mix in a really strong romance like some of my favorites Nalini Singh or Kresley Cole.

What were your favorite scenes to write for SONG OF BLOOD AND STONE? What was the hardest scene to write? Is there a scene or moment that really sticks with you?

Though Usher, Jack’s valet, spends relatively little time on the page, I loved writing the scenes with him and Jack. When two characters have known each other for a long time, it can be really fun to play with how to show their relationship. Usher has known Jack his entire life and so the way they interact is unique. I also loved writing the visions that Jasminda gets from the stone. They were in a different voice, from a totally different perspective and the peeked in on a vibrant, fully formed world that’s different to the one of the main story. Hardest to write were the ones where Jasminda is confronted with the racism and bias of Elsirans.

The scene that sticks with me is when Jack and Jasminda are in the army base and he sleeps on the ground beside her, holding her hand. I find it really sweet and romantic.

What advice would you give aspiring authors, especially authors or color, striving to have their stories and truths shared?

I would tell aspiring authors to really investigate your goals and be frank with yourself about why you want to do this. It’s a difficult path emotionally, creatively, and professionally and what will get you through the low points is being very clear about your “why”. It can also be incredibly rewarding, but knowing what you’re getting yourself into is key.

Writing and publishing are two different disciplines. Your “why” will inform whether you pursue traditional publishing or seek to self-publish. It will keep you going through rejections, delays, bad reviews, disappointment, and the imposter syndrome that we all go through.

The other very important thing is to have a community to fall back on. Whether that’s a chapter of a professional organization like RWA, SFWA, SCWBI, and others, or a Facebook group, critique group, or writer’s circle, having others to commiserate and celebrate with you makes the journey much easier.

Is there a character in SONG OF BLOOD & STONE that you most relate to? How do you select names of your characters?

I think Jasminda represents various aspects of myself both as I am and as I’d like to be. She’s definitely bolder than I am, but her struggle to feel a part of things is one that I understand.

As for naming my characters, for each nation, I asked questions about how the names should generally work. Things like: which prefixes and suffixes are common? Which letters and sounds are prevalent? Which letters or sounds either don’t exist or are more rare? So the Elsirans have a lot of double vowels in their names. Qs, Vs, and Zs are prominent, but there are no hard Cs.

Lagrimari names generally don’t use Js. I set up which suffixes were for men and women and the types of sounds the names would have. There are only 9 last names in Lagrimar, corresponding with the Houses. Jasminda as a name is an exception. Her parents didn’t follow the naming conventions of either country for her or her brothers. Because their interracial relationship was unique, they wanted their children’s names to be distinctive as well.

One of my favorite aspects of Song of Blood & Stone was the parallels between the fantasy world and the social challenges plaguing the US. What do you hope readers take to away from SONG OF BLOOD AND STONE?

Fantasy gives us a different lens through which to view our world without the baggage present in the real world. We can explore the human condition through characters in other worlds, see things from a different perspective, and imagine solutions. Fantasy and sci-fi writers have been doing this for generations. So I hope readers are able to open up their imaginations and are inspired to think a little differently. Maybe challenge their assumptions or be more creative in how they view reality. Eventually, if we can imagine change, we can make it into reality.

I really just hope readers enjoy the story and the characters. Jasminda is a heroine that I had been longing to see, so I hope people get as much joy and heartache from her story as I did when I wrote it.

Can you tell us more about the next books in the series? What are you working on now?

Book 2, WHISPERS OF SHADOW & FLAME, follows a parallel timeline to SONG. It’s about Darvyn, a character we hear about in SONG who was the Earthsinger responsible for disguising Jack. The disguise’s failure gets Jack captured and he wonders what happened to Darvyn. So in WHISPERS, we find out. But it also pushes the story forward, showing what’s going on in Lagrimar in the days before the Mantle comes down and setting up the next challenge that Jack, Jasminda, and Darvyn will face.

Book 3, CRY OF METAL & BONE picks up the story of how Elsira and Lagrimar deal with the fall of the Mantle and the new threat facing the nations.

I’m also working on a brand-new series with dragons.

What are your favorite books you would recommend to readers?

Among my favorites of all time are Wild Seed by Octavia Butler, The Sea of Tranquility by Katja Millay, Finnikin of the Rock by Melina Marchetta, Maybe Someday by Colleen Hoover, Daughter of Smoke & Bone by Laini Taylor and Sheltered by Charlotte Stein. I could go on and on, but I’ll leave it there.