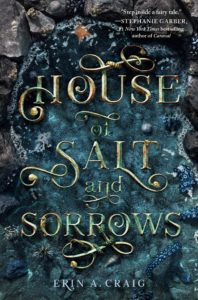 Get swept away in Erin A. Craig's mesmerizing House of Salt and Sorrows. As one by one her beautiful sisters mysteriously die on their isolated island estate, Annaleigh must unravel the curse that haunts her family. Be careful who you dance with. . . .

In a manor by the sea, twelve sisters are cursed.

Annaleigh lives a sheltered life at Highmoor with her sisters and their father and stepmother. Once there were twelve, but loneliness fills the grand halls now that four of the girls' lives have been cut short. Each death was more tragic than the last--the plague, a plummeting fall, a drowning, a slippery plunge--and there are whispers throughout the surrounding villages that the family is cursed by the gods.

Disturbed by a series of ghostly visions, Annaleigh becomes increasingly suspicious that her sister's deaths were no accidents. The girls have been sneaking out every night to attend glittering balls, dancing until dawn in silk gowns and shimmering slippers, and Annaleigh isn't sure whether to try to stop them or to join their forbidden trysts. Because who--or what--are they really dancing with?

When Annaleigh's involvement with a mysterious stranger who has secrets of his own intensifies, it's a race to unravel the darkness that has fallen over her family--before it claims her next. House of Salt and Sorrows is a spellbinding novel filled with magic and the rustle of gossamer skirts down long, dark hallways. Get ready to be swept away.

My first reaction to this book was ‘WTF did I just read?’ and I have been sitting here chewing on it ever since. Looking back at my Goodreads, it only took me a week to read House of Salt and Sorrows, but there were moments where it felt like I had been reading it for months. The story felt a bit all over the place. It started off at a manor by the sea where 12 cursed sisters resided. When another one dies, there is some question as to what really happened. Just when I would get into the mystery of the story, the tone changed to more of a fairy tale and POOF, tension was gone. Our main character, Annaleigh, was pretty passive and was never able to pick that tension back up. Around the half-way point you start seeing where the mystery and fairy tale collide which turned House of Salt and Sorrows into a much darker tale than I was expecting. I could not put the last third of the book down and the horror aspect is really what kept my interest.

I feel like we need more books with strong families. Or maybe I just need to read less dystopian YA where all the adults are criminally bad parents. Not that the parents in House of Salt and Sorrows were much better, but I did really appreciate the closeness of the sisters. One thing I hope is clearer in the final version is the voice of the sisters. There are a couple main characters who do have a more distant voice but many, especially the young sisters, tended to all sound the same. It made it hard to emotionally invest in any of them.

Overall House of Salt and Sorrows is still a bit confounding for me. It is part mystery, part horror and part dark fairy tale that eventually came together to some blend of magic in the end. Some twists could be seen 100 miles away while others snuck up on me. The mythology was both enjoyable and a bit confusing. I wasn’t sure if the Gods/Goddesses were real, myths or both. It was in interesting reading experience to say the least. Since it is still sitting with me, it will officially go on my “I might reread you… one day… in the very distant future” list.